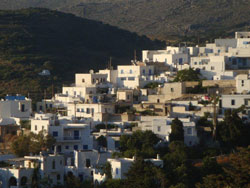 Amorgos is the south-easternmost island of Cyclades. It is located 136 nautical miles from Piraeus, eight hours by boat, about 5.5 hours by speedboat. The name derives from the plant Amorges, by which, the famous female Amorgos tunics were manufactured, the most famous of all, who emphasized the feminine beauty. Also, even today, its botanology is very rich. Blessed with special beauties that make it stand, it combines prime Cycladic landscape, with many beautiful villages, picturesque beaches, and wild beauty with high-steep mountains, culminating in the peak of KRIKELON, of about 800 meters, steep, from the top to the sea, which classifies it in the highest sharp peaks of the Mediterranean. Beautiful trails for hikers and lovers of short or long routes, with angles that are constantly changing, and nature scents depending on the season. Also blessed with ancient civilization, with three ancient city-states of the 2nd or 3rd millennium B.C. with rich contribution to the earliest findings of the Cycladic civilization. Here have been found some of the earliest findings of the civilization, with samples in the museum at Amorgos, and museums in Athens. Its position was a marine crossroad of East and West. Also, it has rare and rich musical tradition with many music varieties such as “kitsos”, “politicos”, “ni ke ntre”, “thermiotikos”, “mantinada”, “apokrianos”, and “of marriage”.

The monastery of Panagia Chozoviotissa radiates in the centuries that have passed and pass [9th century] warmth, love, Christian ideas, shelter of Christianity and faith. Also the monastery of St. John the Theologian [7th century] is 1 hour walk from Lagkada. Amorgos is the favorite place for walkers with really beautiful trails-paths long-near beaches-steep with the most famous of Agia Anna [of the deep blue]. Lagada is ideal for those who want to combine walking towards the sea [25 minutes] the beautiful mountains and paths of Aegiali with the highest peak of KRIKELO, small fields about 800 m, steep from the top to the sea, one of the highest sharp peaks of the Mediterranean. Lagada, eminently beautiful Cycladic village, spread over two hills, altitude 300 m from the port, capital of Aegiali, which is composed of three villages and its port. It has a great view and much green, which makes it special. The beaches of Aigiali are offered for all tastes, and are undoubtedly the best and most protective of the island, for all ages, with restaurants and cafes near you, as well as distant. You are welcome to come.